Back To The Pi

Wow! It's October already.  I'm not entirely sure what happened to the summer, but I do know I haven't looked at my Pi in two months...

In starting up again I wanted to look at the reasons why I hadn't done more.  I am still very excited about the project and the device, so it is not lack of interest.   I feel like saying it was a lack of time and although work has been busy these last two months (with a major release now only days away) it's not fair to say I have not had time for other interests.

So what I am putting it down to is location.  I have read the debate that the cost of a Pi is actually significantly more than $35 as you need a number of accessories before it is a usable computer.  The counter to this argument (which I am generally in agreement with) is that many of the extra accessories you will need, people will find they already own.  Very specifically in this area and the most expensive accessory you will need is a display device.  But here is where I am beginning see a flaw in the argument and why I've not played with my Pi more.

I agree that most households (mine included) will have a HMDI enabled display in the home.  The problem I have, is this display is the television sitting in the living room.  Which has a number of intrinsic problems.  Firstly it is on a television stand, so when the Pi is connected to it you have to sit on the floor in front of it, which is not the most comfortable of positions.  Secondly when the Pi is all wired up in the middle of said living room with wires sticking out from it in all directions it doesn't really add to the ambiance of the room.  This meant I was packing it away between uses, which had the knock-on effect of I couldn't just play with it for 15 minutes as it took about that long to get it set up and put away again.  And the last problem of using the television is that it is actually used to watch television on!  So it was not like I could play with the Pi while watching some mindless TV show. 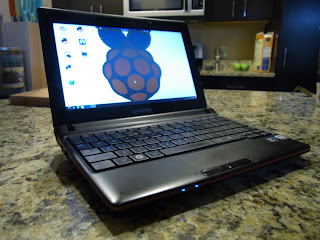 But I am all about solutions to problems and in starting again with my Pi this seems like the biggest one to address.  And my solution?  Remote Desktop.

I got it successively installed last night and can now remote from any of my other machines to the Pi.  This has already paid dividends with me getting further with my GPS project than I had before all from the comfort of my bed.

Look out for a blog post on how to set up Remote Desktop for your Pi coming soon.
Posted by Adam Riley at 07:13